To the best of our knowledge images are available by CC.

Suchomimus was a carnivorous dinosaur, a genus of "thick-boy" type dinosaur with a crocodile mouth that lived during the middle Cretaceous period between approximately 125 and 112 million years ago. It was first discovered in 1997. Suchomimus means "crocodile imitator" because its skull was very similar to that of a crocodile. In addition, it also refers to the long, toothy snout of this distinctively crocodilian dinosaur for catching fish in rivers and streams. Therefore, the main diet of this dinosaur was probably fish. It had a narrow jaw studded with about 100 teeth, not very sharp and curved slightly backward. Suchomimus had a two-foot-high sail on its lower back. However, it was also said to hunt sauropods and other herbivores, but was prevented from pursuing such hunting opportunities because it was a slow-moving dinosaur.

Suchomimus was about 11 m long, about 12 feet tall, weighed more than 6 tons and walked on two powerful hind legs. This carnivore had short clawed arms with three toes.

Suchomimus was classified as a "Spinosaurus", similar to other large theropods of the middle Cretaceous period.

What did Suchomimus eat?

Suchomimus ate fish and if he was lucky enough to catch sauropods and other herbivores.

How fast can Suchomimus run?

Suchomimus is estimated to run at 30.9 km/h.

What does Suchomimus mean?

Suchomimus (meaning "crocodile imitator") because its skull is very similar to that of a crocodile.

What was Suchomimus' weight?

When did Suchomimus live?

Suchomimus lived during the middle Cretaceous period between approximately 125 and 112 million years ago.

Where did they live?

What was your diet?

What kind of dinosaurs are they?

What type of species are they?

How are they classified? 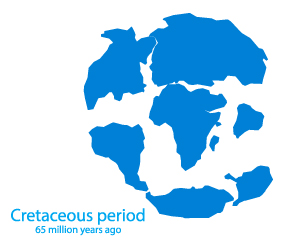 Hi kids! Here are some fun and exciting facts about Suchomimus.